There’s no denying how delicious these S’mores Brownies are! These fudgy brownies are made with gooey marshmallows and delicious melted chocolate. The top of the brownies has yummy graham cracker crumbs sprinkled all over. It’s a favorite recipe for sure!

Using a fudge brownie mix and pairing it up with graham crackers and chocolate chips is the perfect dessert combination. This just might be our new favorite way to make s’mores!

If you’re worried that you’re going to eat the entire pan of brownies, you just might with this recipe! These homemade s’mores brownies really are the best!

If you’re in the mood for a super simple dessert recipe that everyone in the family will love, this is it! Perfect for a weekend at home or just a cure for your sweet tooth.

This S’mores brownie recipe is made using a brownie box mix and just a handful of other simple ingredients. And yes, it really does taste like a s’more!

The best thing about making these decadent s’mores brownies is that they’re really easy to make! The next time that you’re craving that graham cracker sandwich with marshmallows, this is a good idea to whip up!

Using a boxed mix just cuts down on so many steps to this simple brownie recipe. You can really use any type of fudge brownie mix for this recipe!

We really can’t get enough of these Crazy-Good S’mores Cupcakes. Make them once and I think you’re going to have to agree.

Forget about needing an open fire to get that taste of s’mores. You can easily recreate it right at home in your own kitchen!

HOW TO MAKE S’MORES BROWNIES

Preheat the oven to 350 degrees

Make brownies per the brownie mix directions on the box

Top with brownie batter and bake as directed

After removing the pan from the oven, set the oven to broil

Immediately sprinkle marshmallows and graham crackers over the warm brownies

Broil for about 4-5 inches from the heat for about 30-60 seconds or until marshmallows are golden brown. (watch carefully as this happens very fast!)

To serve warm, allow to cool for about 30 minutes

What is the best way to store leftover brownies?

To keep the brownies fresh, store them in an airtight container. These brownies can be stored at room temperature.

How do you keep the brownies from sticking to the baking pan?

You need to be sure that you’re greasing the baking dish. Before you add the batter to the bottom of the prepared pan, spray it with nonstick spray!

You can get that toasted marshmallow taste however you want. As long as you have some marshmallow goodness on top of these graham cracker squares, you’re going to have good memories and flavors of this dessert! 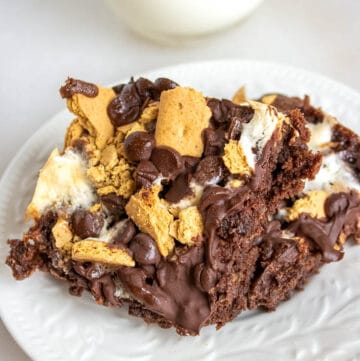 You're going to love the taste and flavor of these s'mores brownies!
No ratings yet
Pin Recipe Save RecipeSaved Recipe! Rate Recipe Print Recipe
Author: All Things Mamma
Prevent your screen from going dark