Mexican corn is also known as elotes or Mexican street corn, but whatever you call it, it’s delicious! Charred grilled corn is tossed with a creamy, spicy sauce, cotija cheese, and a squeeze of fresh lime juice.

Depending on where you live, it’s almost that time of year when corn starts popping up at local farmstands and farmer’s markets. There’s nothing better than fresh sweet corn, and while no one will turn down simple corn-on-the-cob slathered with butter, if you’re craving something different, Mexican corn is just the ticket!

Mexican corn is a popular street food in Mexico, and it’s easy to see why. It’s the perfect combination of sweet, savory, spicy, and rich. The key to great Mexican corn is to char the corn on the grill or stovetop until it’s nice and blackened in spots. This adds a smoky flavor that really takes the dish to the next level.

Once the corn is cooked, it’s coated with a mayo-based sauce that contains cotija cheese, spices, and lime juice. The sauce is spread evenly over the corn and it’s garnished with more crumbled cotija cheese and chopped cilantro.

The only downside of traditional Mexican street corn is that it can be a bit of a mess! So instead of serving it on the cob, I like to remove the kernels, then toss them with all those delicious toppings. It’s just as good, but a lot neater to eat! (Plus, if your kids have braces, they’ll be able to enjoy it too!)

How to Make Mexican Corn

Preheat your grill to high heat and brush the corn with vegetable oil.

Place the corn on the grill and cook it until it’s slightly charred, about 3 minutes per side. Remove from the grill and set on a plate to cool.

Use a chef’s knife or corn zipper to remove the kernels from the cob. Place them in a large mixing bowl.

Add the remaining ingredients to the large bowl and stir to combine. Season to taste with salt and pepper.

How to Store and Reheat Leftover Mexican Corn

Leftover Mexican corn can be stored in an airtight container in the fridge for up to 3 days. When you’re ready to eat it, simply reheat it in the microwave or stovetop over low heat until warmed through.

You can also enjoy leftovers cold, kind of like a Mexican corn salad!

What to Serve With Mexican Corn

While Mexican corn makes a great side dish for Tex-Mex dinners like Sheet Pan Quesadillas and Beef Enchiladas, it’s also just as good for a cookout or any other occasion.

Serve it with some rice, beans, and grilled chicken for a complete weeknight meal, or if you’re making it for a party, set it alongside other popular party dishes like Potato Salad, Macaroni Salad, and Waldorf Salad. It’s also a tasty topping for burgers!

Why do they call it Mexican street corn?

Mexican street corn is named for the fact that it’s often sold by street vendors in Mexico, where it’s called elotes. The corn is grilled or roasted and then covered in a creamy, cheesy sauce flavored with chili powder, lime juice, and cotija cheese. It’s usually served on the cob, but you can also find it served in a cup or bowl.

How do you make Mexican corn on the cob?

To make Mexican corn on the cob, start by grilling or roasting the corn until it’s nice and charred. Mix the sauce ingredients together in a bowl and instead of removing the kernels, simply slather the sauce directly onto the ears of corn.

How do you make Mexican corn from a can?

If you want to make Mexican corn from a can, start by draining and rinsing the corn. Once it’s dry, it can be tossed with the sauce ingredients. It won’t be as flavorful since it’s not grilled, but when fresh corn isn’t in season, you can make it this way. Frozen corn will work, too!

Can I make Mexican corn without mayo? 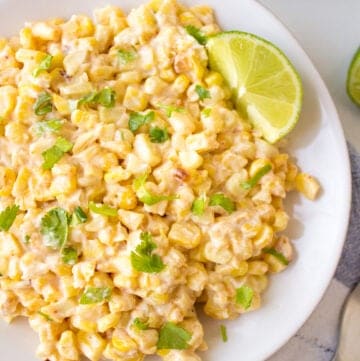