This Instant Pot Penne Alfredo is creamy, rich, and a family-friendly dinner you can get on the table in a matter of minutes! It doesn’t get much easier (or more delicious!) than this!

There’s so much you can do in an Instant Pot, from making Instant Pot rice to corn-on-the-cob—between that and my air fryer, I don’t even know if I need my oven and stovetop anymore! Okay, maaaaybe I’m exaggerating a little, but when it comes to making easy pasta dinners, I really almost exclusively use the Instant Pot at this point. This Instant Pot Penne Alfredo is a favorite of my kids, but my husband and I love it too. You can make it for a romantic Valentine’s Day dinner (be sure to make my Copycat Portillo’s Chocolate Cake for dessert!), but it’s also simple enough to put on your regular weeknight meal rotation.

Instant Pot Penne Alfredo is great for picky eaters because it’s basically pasta in cream sauce—how can you go wrong?! (If you have little ones who refuse to eat “green things,” just omit the parsley from their portions!) Make it a meal by adding steamed broccoli, baked chicken breasts, and maybe some homemade garlic bread too if you’re feeding a big family!

Now, a traditional Italian-style alfredo is simply made with butter and parmesan; American-style is usually made with lots of butter and lots of heavy whipping cream. This recipe lightens things up by using cream cheese and just a half cup of half-and-half, so it’s an alfredo sauce you can eat without feeling disgustingly full afterwards. (I think we all know that feeling, right?!) But don’t worry, you still get the same rich, creamy texture!

Remove the lid and stir in the cream cheese, Parmesan, and half-and-half. Cover without closing tightly and let stand for about 2 minutes, or until the cheese has melted. Uncover, stir, and serve garnished with parsley.

How to Store and Reheat Leftover Instant Pot Penne Alfredo

You can refrigerate penne alfredo in an airtight container for up to 4 days. To reheat, add 1 to 2 tablespoons of half-and-half to the pasta to make the sauce creamy again. I don’t recommend freezing this recipe.

What is the difference between white sauce and alfredo sauce?

A white sauce is thickened with flour, but alfredo doesn’t have any flour added to it.

Can you put uncooked pasta in an Instant Pot?

Yes! You can use your Instant Pot to cook uncooked pasta. This recipe calls for dried penne.

How long does it take to cook pasta in an Instant Pot?

It depends on the shape of pasta you’re cooking. Just like on the stovetop, some shapes of pasta will take longer to cook than others.

What is penne alfredo pasta? 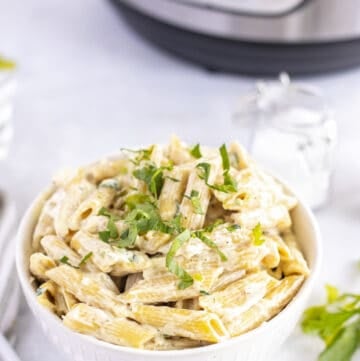 This Instant Pot Penne Alfredo is creamy, rich, and a family-friendly dinner you can get on the table in a matter of minutes! It doesn’t get much easier (or more delicious!) than this!
No ratings yet
Pin Recipe Save RecipeSaved Recipe! Rate Recipe Print Recipe
Course: Main Course
Cuisine: American
Author: Kasey Schwartz
Servings: 4 servings
Prep Time: 10 minutes
Cook Time: 5 minutes
10 minutes
Total Time: 25 minutes
Prevent your screen from going dark

This dish can be kept in an airtight container in the fridge for up to 4 days. Do not freeze If you have leftovers, you can add 1 to 2 tbsp to the pasta when you are going to reheat, this will make the sauce creamier.