Homemade French bread pizza is so easy to make, you’ll never buy the frozen kind again! Even better, you can make a bunch and freeze them for whenever you need a quick lunch.

French bread pizza is a favorite for middle schoolers and microwaving in college dorms, but even as an adult, they’re pretty hard to resist. They start with crusty French bread, then they layer on pizza sauce, melty cheese, and all your fave pizza toppings—you can’t go wrong with that, right? But make your own French bread pizza from scratch for a meal that’s cheaper and tastier than those frozen Stouffer’s pizzas at the grocery store.

French bread pizza is one of those no-recipe-recipes that’s perfect for a busy weeknight. (Yes, there is a French bread pizza recipe below, but consider it a template more than anything else—you can totally mix things up and customize your pizzas!) If you have kids, they’ll love assembling their own, and then you can take a break from meal prep!

A whole loaf of French bread makes about enough French bread pizza for the average family. If you use two loaves, you can make some to eat right away and pop the rest in the freezer. Because this recipe is so easy to make, you can even triple or quadruple the recipe without adding much to your prep time! You can stockpile homemade French bread pizzas in your freezer for a fraction of the price of store-bought, with practically no effort at all.

(If you love pizza flavors, be sure to try my Pizza Sliders too!)

Preheat your oven to 425ºF and slice the loaf of bread in half lengthwise. Place each half on a baking sheet with the cut side up.

Spread the pizza sauce onto the cut sides of the bread, then top with the cheese and any other toppings you’re using.

Bake the French bread pizzas for 12-15 minutes, or until they’re warm and the cheese has melted.

How to Store and Reheat French Bread Pizza

If you have leftover French bread pizza, place it in an airtight storage container or wrap it tightly with foil or plastic wrap. Refrigerate for up to 2 to 3 days. I recommend reheating the pizza in a 350ºF oven for best results, but a microwave will work in a pinch.

If you want to make a big batch of French bread pizza for later, assemble your pizzas as directed in the recipe. Instead of putting the baking sheet in the oven, place it in your freezer; freezing the pizzas before wrapping them will help keep the toppings in place. Once the toppings are frozen, wrap the pizzas in a layer of plastic wrap, then store them in a freezer bag or airtight container. They’ll last in the freezer for up to 3 months; bake them in a 350ºF oven from frozen, adding a few additional minutes to the original cooking time.

Where did French bread pizza originate?

It was invented by a food truck owner in Ithaca, New York in 1960 because he didn’t like selling pizza by the slice! It was originally called Poor Man’s Pizza.

How do you reheat French bread pizza?

I think reheating French bread pizza in a 350ºF oven is best; in the microwave, it can get either soggy or chewy.

Why is it called French bread pizza?

Because it’s traditionally made on French bread! That said, you can use other long, thin types of bread loaves to make it, too. 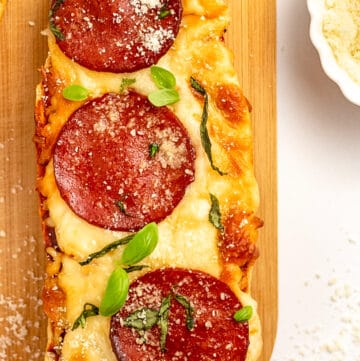