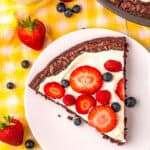 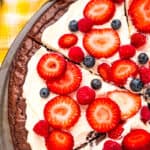 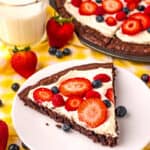 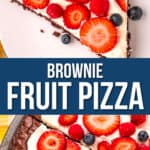 Brownie Fruit Pizza combines a fudgy brownie crust with sweet whipped cream cheese and fresh berries for a fun, fresh dessert that everyone in the family will love. It’s an easy way to upgrade the boxed brownie mix that’s been sitting in your pantry and you can make it your own by switching up the toppings. 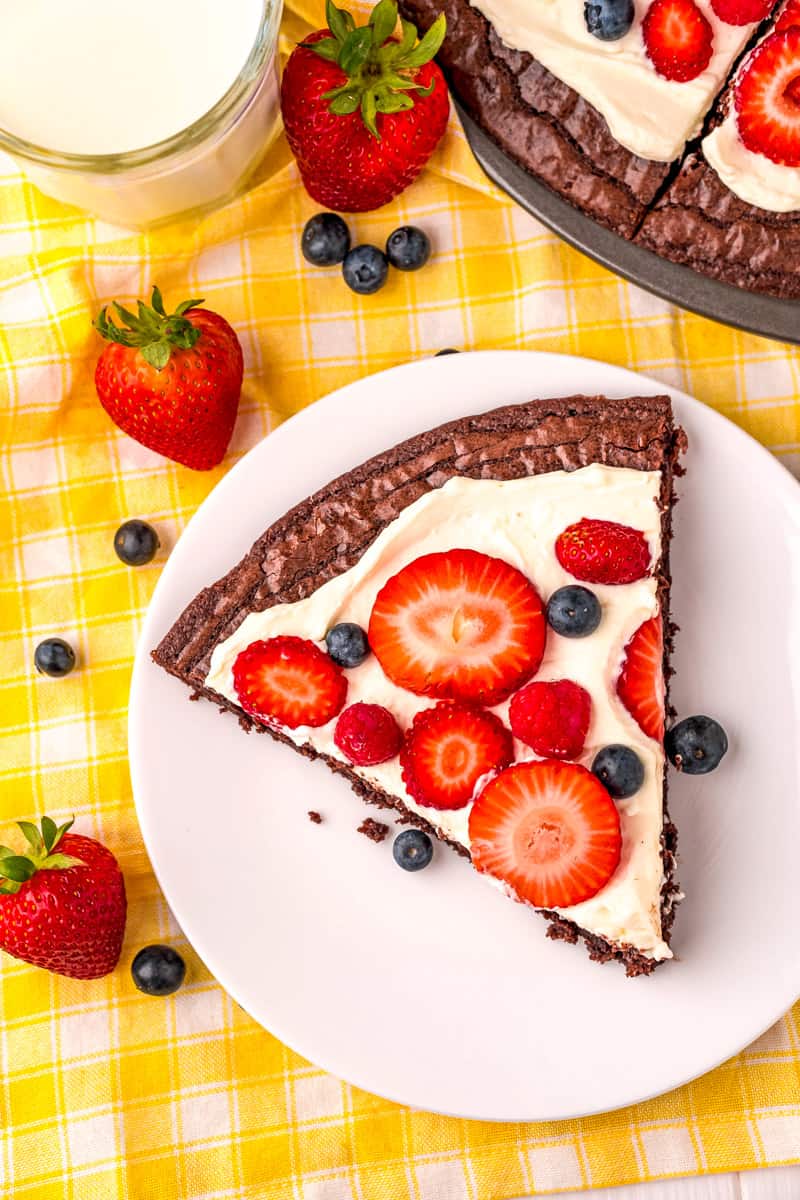 A Simple Recipe With Brownie Mix

I’ve posted a lot of recipes with brownie mix over the years here on All Things Mamma because when it comes to boxed mixes, brownies might just be my favorite. Not that cake mixes aren’t good too (at least when you tweak them to make them taste homemade!), but it’s impossible to resist a chewy, chocolatey brownie fresh out of the oven.

If your family has a weekly pizza night, this Brownie Fruit Pizza is the perfect dessert to serve after dinner. You don’t even have to make it a pizza, though—you can make your brownies in a square baking dish if that’s what you have and they’ll be just as delicious!

Just like a traditional pizza, a Brownie Fruit Pizza starts with the crust. You’ll make your boxed brownie mix according to the package instructions and spread it onto a pizza pan as if it were pizza dough. After it’s finished baking, you top it with the cheese—sweet whipped cream cheese, that is—and then scatter fresh berries over the top.

One fun variation on this recipe is to make a bunch of personal size brownie crusts on a baking sheet, then let everyone in the family top their own pizzas. Double or triple the recipe and you’ve got a great activity to keep kids busy at a birthday party or get-together! Make a topping bar with bowls of fruit, mini chocolate chips, M&Ms, marshmallows, and sauces like chocolate, caramel, and strawberry. 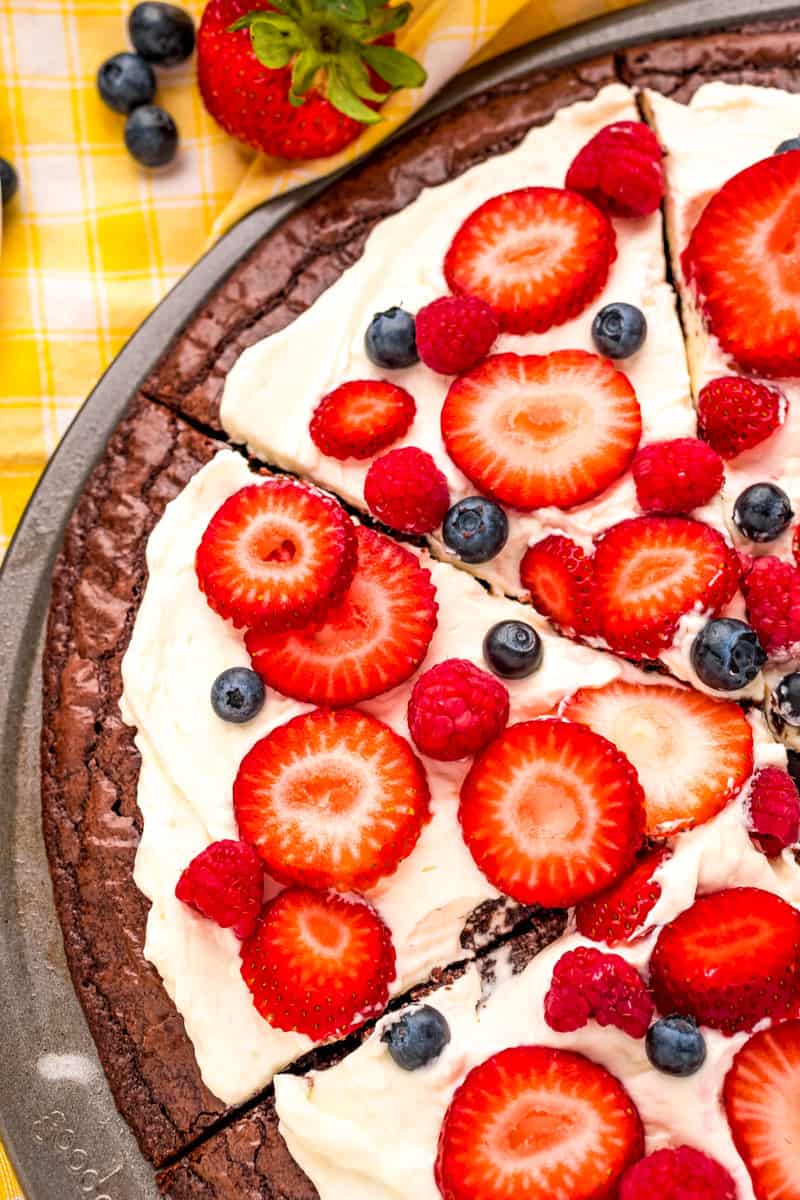 Boxed brownie mix – In addition to buying a box of brownie mix, you’ll also need the ingredients listed in the instructions to make them.

Heavy cream – Heavy cream thins the cream cheese a bit without making it lose its creaminess.

Powdered sugar – There’s just enough sugar in this recipe to sweeten the cream cheese so it retains its tanginess, making it the perfect complement to the fresh fruit and brownie crust.

Strawberries – Have your strawberries been sitting in the fridge for a while? Here’s how to revive them.

Raspberries – You can substitute blackberries if you prefer those.

Blueberries – Blueberries can also be swapped for a different type of berry, fruit, or even a non-fruit topping like marshmallows, mini chocolate chips, or chopped nuts.

How to Make Brownie Fruit Pizza

Preheat your oven to 350ºF and grease a round pizza pan with non-stick cooking spray or oil.

Follow the instructions on the boxed brownie mix and prepare the batter according to the fudgy recipe.

Transfer the brownie batter to the pan and use a spatula to spread it into a circle, making sure it’s even in thickness on all sides. Bake for about 15 minutes, or until the edges are firm and the top is a bit flaky. Let the crust cool on the pan, set on top of a wire rack.

Beat the cream cheese until it’s smooth, then add the heavy whipping cream. Once the cream is incorporated, add the vanilla and powdered sugar. Continue to beat at high speed until the mixture is thick and fluffy.

Spread the whipped cream cheese onto the cooled brownie crust. Scatter the berries over the top of the cream cheese, then slice. 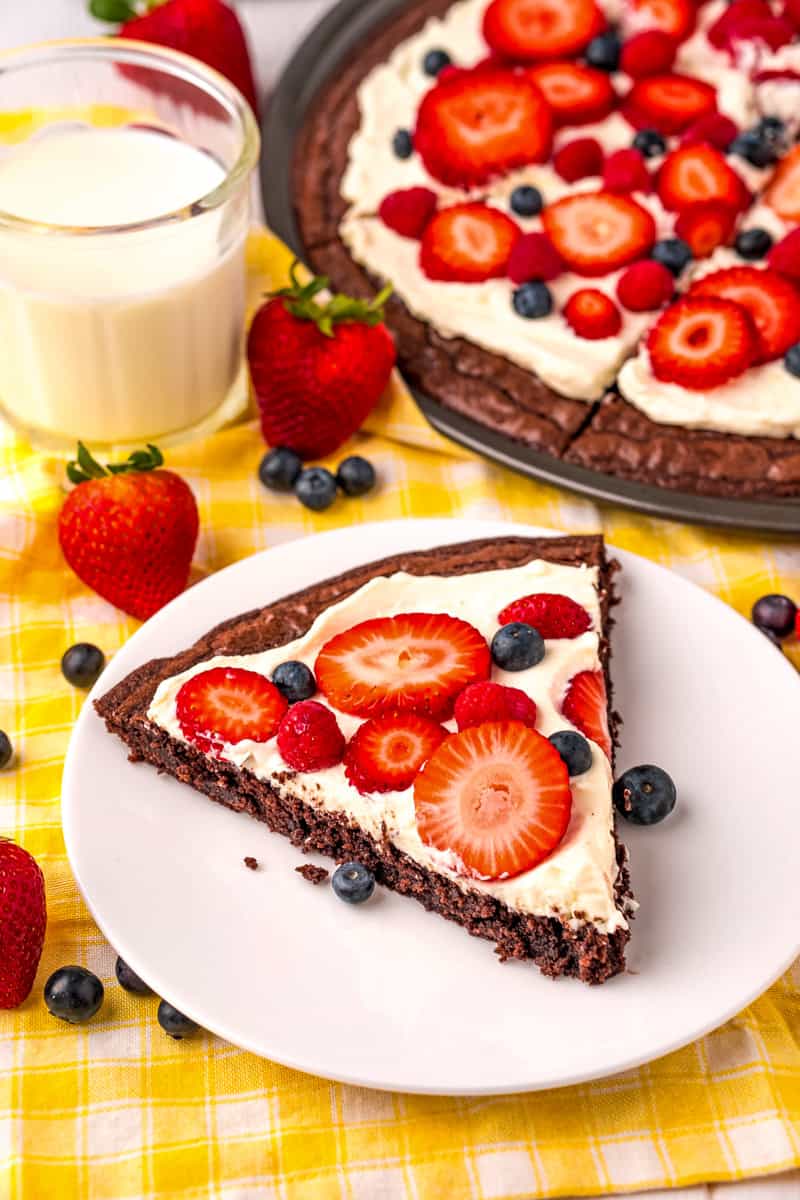 What is fruit pizza?

Fruit pizza is a type of dessert pizza topped with fruit. Some recipes call for regular pizza crust, while others call for sugar cookie dough. This Brownie Fruit Pizza has a crust made with boxed brownie mix, making it perfect for chocolate lovers!

How should I store fruit pizza?

Since my Brownie Fruit Pizza has a cream cheese topping, it should be wrapped and stored in the refrigerator until you’re ready to serve it.

Can Brownie Fruit Pizza be made a day ahead?

Yes and no! You can make Brownie Fruit Pizza a day ahead, but it’s not going to be quite as good as when it’s freshly assembled because the brownie crust will soften a bit from the moisture of the topping. If you want to get a head start, prepare the crust, whipped cream cheese, and fruit and store them separately (brownie on the countertop, everything else in the fridge), then assemble them when you’re ready to serve.

Who else loves brownies?! Here are some more ideas for boxed brownie mix. 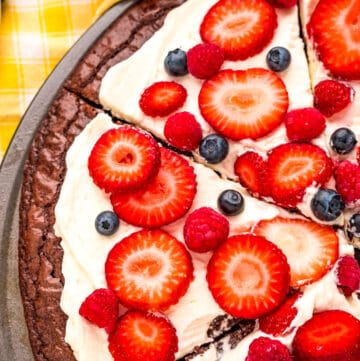 Refrigerate until served or refrigerate any leftovers.
This recipe has been tested with Betty Crocker and Duncan Hines Brownie Mixes, BC doesn’t contain any leavening agents but Dh does and both worked fine. The BC was a firmer brownie overall and didn’t really rise. The DH rose slightly and was a fluffier fudge consistency (this is what’s pictured in the photos).
Plain whipped cream or thawed whipped topping may also be used.
Did You Make This?I want to see! Be sure to leave a rating below & tag us on social media #allthingsmamma!