This No-Bake Oreo Cheesecake is the perfect dessert for those days when you don’t want to turn on the oven! It’s rich, creamy, and loaded with everyone’s favorite cookies!

Cheesecake is one of those desserts that always seems like it should be difficult to make, but this No-Bake Oreo Cheesecake recipe proves that making cheesecake doesn’t have to be a chore. You don’t even need an oven! With its rich, creamy filling and crispy Oreo crust, this recipe is always a hit with family and friends, even if it’s not exactly a traditional cheesecake.

(PS – If you love Oreos, you should also try my #1 recipe – No Bake Oreo Dessert plus my Oreo Pie and Oreo Poke Cake!)

No-Bake Oreo Cheesecake is one of those desserts that’s hard to resist; it’s rich, creamy, and it has Oreo both in the crust and in the filling for double the chocolaty goodness. There are few desserts as tasty as cheesecake, but when you add Oreos to the mix, it’s next-level delicious.

Because this is a no-bake cheesecake recipe, there’s no fussing with a water bath, and no waiting for the cheesecake to bake and then chill. That said, there’s still chilling time needed for this recipe, so make sure you plan for that! I recommend whipping it up the day before you plan on serving it.

For the Oreo Crust:

For the No-Bake Cheesecake Filling:

How to Make No-Bake Oreo Cheesecake

In a food processor, pulse the Oreo cookies until they are finely chopped. Transfer them to a mixing bowl and add the melted butter. Mix them together until they are fully combined, then press the Oreo crust mixture firmly into the bottom and up the sides of a 9-inch springform pan. Chill the crust in the refrigerator while you make the filling.

In the bowl of an electric mixer fitted with the whisk, beat the cream cheese until it is smooth and creamy. Add the powdered sugar and vanilla and continue mixing until they are fully combined.

In a separate bowl, use a whisk to beat the heavy cream into stiff peaks.

Gently fold the whipped cream into the cream cheese base, reserving a half cup for the topping, then fold in 12 chopped Oreos.

Pour the filling into the crust. Be sure to spread it evenly throughout. Cover the dish tightly with plastic wrap and refrigerate for at least 6-8 hours, or preferably overnight.

Top with the remaining crushed Oreos and whipped cream, then serve.

How to Store No-Bake Oreo Cheesecake

No-bake cheesecake is creamier than baked cheesecake, and it’s certainly a lot easier! Whether it’s better is up to you, but I think both are equally delicious in different ways!

Why is my no-bake Oreo cheesecake not firm?

No-bake cheesecake doesn’t get firm like a baked cheesecake. The filling is light, fluffy, and creamy.

Can you put a no-bake cheesecake in the freezer to set?

No, you can freeze leftover no-bake cheesecake, but it will change the texture, so you shouldn’t put it in the freezer to speed up the setting process. 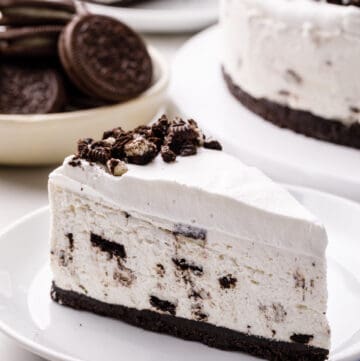