John Wayne casserole is a Tex-Mex inspired casserole that layers taco-seasoned ground beef, veggies, cheese, and a creamy sauce over a biscuit dough base. It’s destined to become a family favorite!

There are some things that are always a hit: casseroles, cheese, tacos, creamy sauces, and biscuits. When you combine all of these things into one single recipe, you’re guaranteed a winner—and that’s exactly what you get with John Wayne casserole. Make it for dinner and your family will devour it!

I think John Wayne casserole might win the award for the strangest recipe name on my blog! Believe it or not, the original recipe actually came from John Wayne—yes, the John Wayne.

He contributed the recipe to a 1979 cookbook called Cooking with Love from Cara and Her Friends, which was compiled by Cara Connery to raise money for the American Cancer Society. She wrote to 1,400 famous people asking for recipes and together with her mom, she assembled and self-published the cookbook—and she wasn’t even in high school yet!

Now, the original John Wayne casserole, as published in the cookbook, is pretty different from the version you’ll find below. Over the years, people have made tweaks and changes—some versions have potatoes or tater tots instead of biscuits, while others are more like the original, which is a super cheesy meatless egg bake (it calls for 2 pounds of cheese!). I like this version because it’s a complete meal in one dish and a little bit like a Taco Casserole—and as much as I love cheese, 2 pounds of it is a little much!

How to Make John Wayne Casserole

In a large skillet, brown the ground beef until it’s no longer pink. Pour off the grease, then add the taco seasoning and water and simmer for 3 to 4 minutes.

In a second bowl, combine the biscuit mix and water and stir until a soft dough forms. Press the dough into the bottom and a half-inch up the sides of the prepared pan.

Place the casserole in the oven and bake for 30 to 35 minutes, or until the edges are slightly browned.

How to Store and Reheat John Wayne Casserole

Why is it called a John Wayne casserole?

What do you serve with John Wayne casserole?

This is a one-dish meal, so you really don’t have to serve anything with it! If you do want to round things out with a side dish, I recommend a simple salad, roasted vegetables, or my Instant Pot corn-on-the-cob.

What is Mississippi-Style John Wayne casserole?

It’s a variation of John Wayne casserole that was published in Mississippi Magazine. It’s similar to my version, but it adds a cornbread topping. 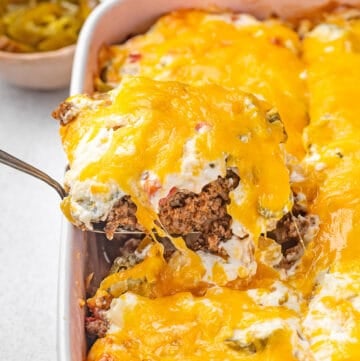