This easy French Silk Pie recipe is a classic! A rich, creamy layer of chocolate pie filling is topped with whipped cream and chocolate curls for an irresistible dessert.

While there are some pies that clearly have a season—you don’t see many people serving pumpkin pie in the summer!—French Silk Pie is a year-round kind of treat because chocolate is good whenever you serve it. Who can turn down a chocolate-y dessert? Not me! Especially when it involves a creamy, smooth, mousse-like chocolate filling.

You’ve probably had French Silk Pie before, but if you haven’t tried a homemade recipe, you’re missing out! It’s so much more decadent than the ones sold in the freezer section at the grocery store or even the ones you buy at popular chain restaurants. Let me tell you: this dessert is an experience.

I think French Silk Pie is the perfect dessert for Christmas or New Year’s Eve, but like I said: it’s a year-round dessert! Make it for Thanksgiving if you want to switch things up from the usual pumpkin and apple pie, Easter, 4th of July, or heck, whip it up on the weekend if you’re craving chocolate. It’s easy enough that you can make it whenever you want!

The classic topping for French Silk Pie is whipped cream and chocolate curls. You can find chocolate curls in stores sometimes, but if your grocery store doesn’t carry them, you can buy a chocolate bar and use a vegetable peeler to make your own. Mini chocolate chips will work too if you don’t want to put in all that effort!

How to Make French Silk Pie

Preheat the oven to 450ºF. Make the pie crust dough and place it in a 7-inch pie plate. Flute the edge, then line the shell with heavy-duty foil. Bake the crust for 4 minutes, then remove the foil and bake for 2 minutes more, or until the crust is golden brown. Cool on a wire rack.

Combine the sugar and eggs in a small saucepan over low heat. Stir constantly until the mixture coats the back of a metal spoon. Remove from heat and stir in the chocolate and vanilla. Let cool until the mixture is lukewarm.

In a large mixing bowl, cream the butter until it’s light and fluffy. Beat in the cooled chocolate mixture on high speed for about 5 minutes. In another large bowl, beat the cream until it begins to thicken, then beat in the confectioners’ sugar until stiff peaks form.

Fold the whipped cream mixture into the chocolate mixture, then pour the filling into the crust. Chill for at least 6 hours, then garnish and serve.

How to Store French Silk Pie

Why is it called French Silk Pie?

It’s not actually French! The pie gets its name from the smooth, silky filling. The recipe is American, but maybe the inventor added “French” to the name to make it sound fancy!

Does French Silk Pie need to be refrigerated?

Yes! Keep this pie in the refrigerator or freezer. It will spoil if kept at room temperature.

Is it safe to eat French Silk Pie?

Some French Silk Pie recipes use raw eggs, but this version cooks the eggs, so it’s safe to eat.

If you’re looking for more….try these recipes next! 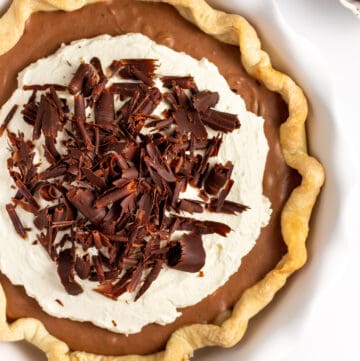