Dutch apple pie is filled with tender baked apples, then topped with a buttery brown sugar crumble topping. It’s absolutely irresistible and the perfect way to use fall apples!

A classic double-crust apple pie is delicious, but a Dutch apple pie gives you the best of both worlds—a pie crust and a streusel topping. Think of it as a mash-up between apple pie and apple crisp or apple crumble! Kind of like an apple crumble pie.

Plus, when you don’t have to roll out that top pie crust—or cut it into strips and weave it into a lattice—you’ll save a lot of time! Mixing up that buttery brown sugar crumble topping is so much easier. Once it’s finished baking, all that’s left to do is slice it and top it with whipped cream or a scoop of vanilla ice cream.

Or drizzle it with caramel sauce! Or scatter pecans and walnuts over the top. Yum.

When we go apple picking in the fall or pick up a bag of apples at the farmer’s market, I love using them to make this Dutch apple pie. I have a hard time getting my kids to stop picking at the topping while it cools, though—it’s pretty hard to resist!

Granny Smith apples are always a classic choice for a baked dessert because they hold their shape well and have a tart taste that keeps your baked goods from being cloyingly sweet, but don’t be afraid to branch out and try other varieties, too. This Dutch apple pie is great with Honeycrisp, Braeburn, Fuji, Pink Lady, and other firm, sweet-tart apple varieties.

How to Make Dutch Apple Pie

Toss the sliced apples, lemon juice, sugars, flour, cinnamon, and vanilla in a large bowl until the apples are evenly-coated.

Combine all of the ingredients in a medium bowl and use a pastry blender or fork to incorporate the butter into the dry ingredients until a coarse crumble forms. Squeeze the mixture together with your hands until all the butter is absorbed and your crumb topping comes together.

Pour the apples into the pie crust, discarding any liquid. Sprinkle the topping over the apple pie filling.

Place the pie on the lowest rack of the oven and bake for 50 to 60 minutes, or until the apples are bubbling up and the topping is golden brown.

Tip: You can place the pie pan on a baking sheet to catch any overflow!

Let the pie come to room temperature, then slice and serve with your favorite toppings.

How to Store Dutch Apple Pie

I recommend storing any leftovers in the fridge. Cover the pie loosely with foil or plastic wrap and it will keep for 3-4 days. You can also freeze slices of Dutch apple pie for up to 2 months—just be sure to wrap them tightly!

You can serve leftover Dutch apple pie chilled, at room temperature, or warm it up in the microwave a bit.

What is the difference between Dutch and French apple pie?

Why do they call it a Dutch apple pie?

There’s a little bit of controversy about this! Some people claim that the recipe originated in Holland, hence the name. They say the version we eat today is a variation of the Dutch appeltaart recipe.

These days, you’ll find Dutch apple pies all over the United States.

Is Dutch apple pie the same as apple crumble?

What’s the difference between Dutch apple pie and apple cobbler?

An apple cobbler also has a topping, but it’s more like biscuit dough than the sweet brown sugar and butter topping used for Dutch apple pies. The dough is dropped in spoonfuls on top of the fruit before baking, giving it a “cobbled” appearance, hence the name. 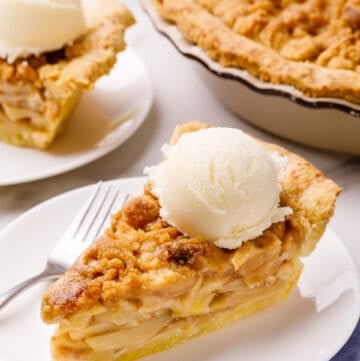