Easy apple crumble isn’t easy as apple pie—it’s even easier! No fussing with pie crust needed, just sprinkle a buttery crumble topping over apples, pop it in the oven, and you’re good to go. This classic apple crumble recipe is one of my family’s favorite fall desserts and I think it will be one of yours too!

Now, don’t get me wrong: I love pies. But if you’re looking for an effortless fruit dessert, it’s crumble all the way. The difference between a pie and a crumble is that pies have a filling and one or two crusts, while crumbles have no crust at all.

Another comparison you might make is apple crumble vs. apple crisp. Traditionally, a crisp recipe would have oats in the topping and a crumble wouldn’t, but these days crisp and crumble usually refer to the same thing—a baked fruit dessert with a streusel-like topping

This easy apple crumble recipe is perfect to make after a day spent picking apples. The apples are layered onto the bottom of a baking dish, then topped with a mixture of flour, rolled oats, brown sugar, cinnamon, and butter. After baking, the topping becomes browned and crisp. I highly recommend serving your crumble with a scoop of vanilla ice cream! (A drizzle of caramel sauce doesn’t hurt either. Just sayin’.)

Here’s what you’ll need to make this apple crumble recipe:

How to Make Apple Crumble with Oats

Preheat the oven to 350ºF, then peel and dice the apples.

In a large bowl, stir together the flour, oats, brown sugar, and cinnamon. Cut in the butter until you have a crumbly mixture.

3. Make the Apple Base

Combine the apples, sugar, lemon juice, flour, and cinnamon in a large bowl and toss to combine.

Pour the apples into a 9×13-inch baking dish, then scatter the crumb mixture over the top, making sure it’s evenly distributed.

Place the baking dish in the preheated oven and bake for about 45 minutes, or until the apple layer is bubbly and the topping is golden brown. Serve warm with a scoop of ice cream.

Yes, a crumble will last on the countertop for about 2 days—just wait until it cools, then wrap the baking dish tightly with plastic wrap. In the refrigerator, you can keep an apple crumble for up to 5 days. It’s best reheated in the oven, which re-crisps the topping.

You can eat it either way, but I think it’s best served warm! Don’t forget to add a heaping spoonful of vanilla ice cream!

You can eat it cold, so don’t think that you can’t. The crumble topping may not be as crispy as you’d like, but it’s still pretty dang good!!

What’s the best apple to use for apple crisp?

This can vary by quite a bit. The best apples to use, in my opinion, are Honey Crisp apples or Granny Smith apples. Both are crunchy, but one is super sweet, and one is a bit more tart.

Craving more apple recipes? I’ve got some great ones for you! 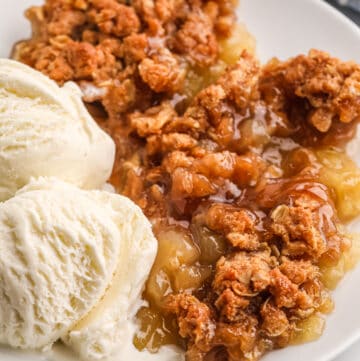