Banana Split Pie? Yes! Because the only thing better than a banana split from your favorite ice cream shop is an easy, no-bake Banana Split Pie from your very own kitchen. Obviously, this dessert is a hit at any summer party, but it’s great any time of year. Ready to dig in?

When it comes to easy desserts, instant pudding reigns supreme—especially when it’s paired with frozen whipped topping. I’ve shared lots of pies made with pudding mix and Cool Whip, but I think this Banana Split Pie wins the prize for being the most unique. Instead of scoops of ice cream served over a sliced banana, we’re serving up all of your fave banana split toppings on a base of creamy banana pudding!

The best thing about the recipe—well, the second best thing, after how good it tastes—is that it is so flippin’ simple to make. You only need 10 minutes to put it all together, and that’s being generous. The hardest part is waiting an hour for it to chill so you can eat it!

1. Make the Filling: Combine the milk and instant pudding mix in a large bowl and beat for 2 minutes at low speed. Fold in a cup of the whipped topping.

2. Chill: Pour the pudding mixture into the prepared pie crust and pop the pie in the fridge. Let it chill until it’s set—it’ll take about an hour.

3. Add the Fruit: Take the pie out of the fridge and top it with the banana slices, then the crushed pineapple.

4. Top the Banana Split Pie: Spread the remaining whipped topping over the pineapple, making sure it’s evenly distributed. Sprinkle with walnuts, then drizzle chocolate sauce over the top and finish with the maraschino cherries.

5. Chill Again: Return the pie to the fridge and let it chill for 1 to 3 hours.

Can you make Banana Split Pie in advance?

Yes, Banana Split Pie is perfect for making ahead of time. It will last up to a day in the fridge—any longer than that and the bananas will start to brown. You may want to add the syrup, nuts, and cherries right before serving to keep the nuts fresh and the syrup and cherries from bleeding into the whipped topping.

Can Banana Split Pie be frozen?

Yes, Banana Split Pie can be frozen and then thawed in the refrigerator a day before serving. As with any frozen-and-thawed dessert, it’s not quite the same as serving it fresh, but the ingredients in this banana split dessert are all freezer-friendly. 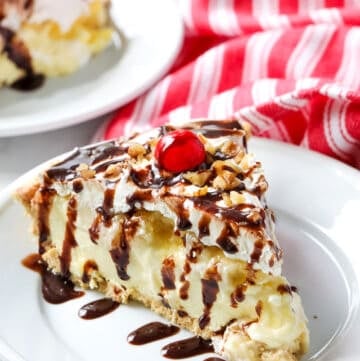 Keyword: bananas, easy dessert, no bake, pie
Did you make this recipe?Mention @kasey_allthingsmamma or tag #allthingsmamma!