You’ve probably made apple pie, apple crisp, and maybe even apple crumble, but have you ever made apple turnovers? If not, this is the time to start! They’re incredibly easy to make and if you have a weakness for flaky layers of puffy pastry, they might soon be your very favorite apple dessert!

Think of turnovers as handheld pies, or mini pies if you will. But instead of a traditional pie crust, we wrap up that apple pie filling in perfect, flaky puff pastry. Each bite of the crispy, buttery puff pastry exterior gives way to tender baked apples in the center. Oh yes!

Apple turnovers really couldn’t be any easier to make, either. They start with frozen puff pastry, which means there’s no need to fuss with measuring out flour, cutting in butter, etc., for pie dough. You’ll need to roll out the puff pastry sheets so they’re the right size, but that’s it!

Tucked into the puff pastry are brown sugar and cinnamon spiced apples. To make the filling, you simply toss the apples with the seasonings and a bit of lemon juice in a mixing bowl. Once you’ve filled the apple turnovers, you bake them in the oven and serve them up warm or cooled.

This recipe makes 8 turnovers, but if you’re baking for a bigger crowd, you can make smaller apple turnovers with the quantities in the recipe card (just cut the pastry sheets smaller and use less filling per turnover), or simply double or triple the recipe. It’s easy enough that it’s not much more work to make extras!

Here are a few ways to customize your apple turnovers.

How to Make Apple Turnovers

Preheat your oven to 400ºF and line two sheet pans with parchment paper.

In a large mixing bowl, toss the diced apples, sugar, cinnamon, salt, and lemon juice, ensuring that all the apples are evenly coated. Let this mixture sit for 10 minutes while you work on the puff pastry.

3. Roll Out the Puff Pastry

Use a rolling pin to roll out the puff pastry sheets to 12×12-inch squares on a lightly floured surface. Cut each sheet into 4 squares.

Spoon the apple mixture into the middle of each pastry square, leaving a 1/4-inch border. Fold the squares corner-to-corner, forming a triangle, and crimp the edges with a fork to seal them.

Place the turnovers on the parchment-lined baking sheet and brush them with egg wash, then sprinkle them with the sugar, if you’re using it. Bake for 18 to 20 minutes, or until the puff pastry is golden brown. Cool on a wire rack before serving.

How to Store Apple Turnovers

These turnovers are best the day they’re made, but they will keep in an airtight container at room temperature for 2-3 days. You can also store them in the freezer for up to 3 months. Let thaw overnight in the fridge before reheating in a 350ºF oven until warmed through.

What is the best apple to use for turnovers?

While you can use any type of apple in this recipe, we prefer Granny Smith apples because they hold their shape well and don’t turn to mush when cooked. They’re a great choice for whenever you’re baking!

What are apple turnovers made of?

Apple turnovers are made of a puff pastry dough filled with apples that have been tossed in brown sugar and cinnamon. They’re baked until the pastry is golden brown and flaky.

What is the difference between a turnover and a strudel?

Turnovers and strudel are both types of pastries that can be filled with fruit, but there are some key differences. First, turnovers are typically made with puff pastry dough while strudel is made with a yeasted dough. Second, strudel dough is stretched very thinly so that it becomes almost transparent, while turnover dough is rolled out to a thickness of about 1/8 inch.

Are apple turnovers breakfast or dessert?

They can be both! Since they’re made with fruit, they make a great breakfast pastry, but they’re also sweet enough to be served as a dessert. We like to enjoy them any time of day! 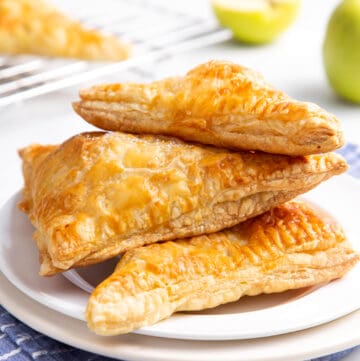