7-Layer Dip is a party favorite with a Tex-Mex flair! A creamy bean dip base is topped with guacamole, sour cream, cheese, and taco fixings.

Move over chips and salsa! This easy 7-Layer Dip recipe is my favorite thing to pair with tortilla chips because it’s got a little bit of everything—refried beans, tomatoes, guac, cheese, sour cream, black olives, and green onions. If you like tostadas, you’ll love 7-Layer Dip because it’s kind of like a tostada in crowd-pleasing appetizer form.

7-Layer Dip is always a big hit at parties because everyone loves those Tex-Mex flavors! Even better, 7-Layer Dip is super easy to make. All you need to do is stir together the ingredients for the bean dip layer, then make the guacamole—everything else is just a matter of layering. Make the dip in advance and you have a party appetizer ready to go whenever your guests arrive!

There are many versions of this dip, but the one below is my favorite. I share a few variations on the original, too, if you want to mix things up. There’s really no right or wrong—if you don’t like one ingredient, feel free to swap it out for something else, or try my 7-Layer Greek Dip for something different!

How to Make 7-Layer Dip

Stir together the refried beans, diced tomatoes, and taco seasoning in a bowl and spread it onto the bottom of a 7×11-inch casserole dish, using a rubber spatula to make sure it’s evenly distributed.

In another bowl, mash the avocado, lime juice, and cilantro until smooth. Spread the guacamole over the beans.

Stir the sour cream and spread it over the guacamole layer.

After the sour cream, layer the cheese, diced tomatoes, black olives, and green onions. Cover with plastic wrap and chill until you’re ready to dig in. Serve with sturdy tortilla chips for scooping!

Hint: Use a glass dish if you have one so the layers can be seen from the side.

How to Store 7-Layer Dip

Store leftover 7-Layer Dip tightly covered in the refrigerator for 2 to 3 days. I don’t recommend making it any more than a day in advance because the ingredients can start to release a bit of water, making it not look as pretty—it’s perfectly fine to eat leftovers at this point, though!

Can I freeze 7-Layer Dip?

No, this 7-Layer Dip recipe won’t freeze well; the fresh tomatoes and green onions will be limp once they thaw, and it’s likely that the dip will be watery.

Because there’s guacamole in this dip, it’s best served cold. If you want the bean layer to be warm, you can warm the bean mixture in the microwave, spread it on the bottom of the dish, then layer on the remaining (cold) ingredients and serve immediately.

Can you make 7-Layer Dip without guacamole?

Yes, you can omit the guacamole or substitute a salsa verde if you like. 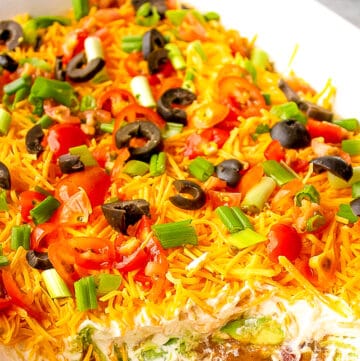