Coca-Cola Cake is a Southern classic! It’s fudgy, moist, and full of rich chocolate flavor, which is why you’ll want to make it again and again!

Coca-Cola Cake cake is a delicious Southern dessert, in the tradition of Old Fashioned Red Velvet Cake and Coconut Cake. And just like my recipes for those other cakes, my Coca-Cola Cake recipe takes just minutes to prepare. (Sure, you could make it a layer cake or pipe on fancy decorations, but who has time?! We want dessert, and we want it fast!)

Have you ever tried Coca-Cola Cake? If not, you’ve been missing out! It’s a popular dessert at the Cracker Barrel restaurant chain, so just like my recipe for Portillo’s chocolate cake and Chocolate Mayonnaise Cake, you might consider this Coca-Cola Cake a copycat recipe!

The Coca-Cola in the cake batter gives it a moist, fudgy texture, while the frosting on top is rich, chocolatey, and infused with cola flavor. This is the perfect dessert for any occasion, whether it’s a birthday party or to celebrate your kiddo getting an A on a dreaded math test!

For the Coca-Cola Cake:

For the Coca-Cola Icing:

How to Make Coca-Cola Cake

Preheat your oven to 350ºF and grease a 13×9 inch baking pan with cooking spray or butter.

In a large mixing bowl, whisk together the first 5 ingredients. In a small saucepan set over medium heat, combine the cola, butter, and cocoa. Cook the mixture until it’s boiling, stirring occasionally. Stir the cola mixture into the dry ingredients.

In a small bowl, whisk together the eggs, buttermilk, and vanilla. Whisk this into the rest of the batter.

Pour the cake batter into the prepared pan. Bake for 25 to 30 minutes, or until a toothpick inserted into the center comes out clean.

5. Make the Glaze and Finish

When your cake is almost done, make the glaze. In a small saucepan, bring the cola to a boil. Cook for 12 to 15 minutes, or until the liquid is reduced to 1/2 cup. Stir in the butter and cocoa; once the butter melts, remove the pan from heat. Stir in the confectioners’ sugar and pour the mixture over the hot cake.

How to Store Coca Cola Cake

If you’re lucky enough to have any leftovers, here’s how to store them so they stay fresh and delicious.

First, make sure the cake is completely cooled before wrapping it tightly in plastic wrap or aluminum foil or transferring it to an airtight storage container. Then, store the cake at room temperature for 3 to 4 days. You can also freeze the cake for up to 3 months.

What is Coca-Cola Cake made of?

Coca-Cola Cake is made with all the standard chocolate cake ingredients like flour, cocoa powder, eggs, and butter, but then it also has a unique twist: a can of Coca-Cola!

Where did Coke cake come from?

Historians have found newspaper recipes from the South that use cola in cake, but the earliest references to an actual Coca-Cola Cake recipe as we know it today appeared in 1950s-era cookbooks.

The question on everyone’s mind! Does this cake actually taste like Coke?! Well, yes and no! The cake itself tastes like a rich, fudgy chocolate cake, but it doesn’t have a strong cola flavor. That said, the frosting does have more of a cola flavor to it, so if you want your Coca-Cola Cake to taste like Coke, I don’t recommend skipping the icing! 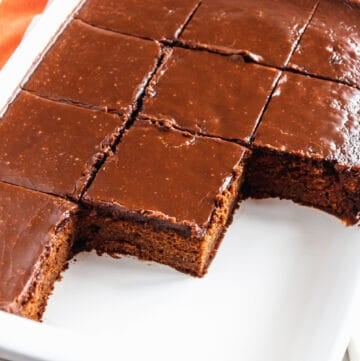