This Cinnamon Swirl Bread is a sweet quick bread recipe with a ribbon of cinnamon sugar baked inside! The irresistible creamy glaze is the perfect finishing touch.

I’ve shared many quick bread recipes on All Things Mamma, from zucchini bread to banana bread and cozy loaves of cream cheese filled pumpkin bread, but this Cinnamon Swirl Bread is pretty unique! There’s no fruit or veggie involved in the making of this bread, but there is a spiced, sugary swirl in the middle. Between the cinnamon sugar and the glaze, I’d say this bread is a little bit like cinnamon rolls in quick bread form—but unlike cinnamon rolls, there’s no yeast needed! (Technically speaking, quick bread is any bread recipe that’s made with baking soda or powder instead of yeast.)

The other thing that I love about this recipe is that it’s easier to make than you might expect and you probably have most of the ingredients on hand in your kitchen already. That makes this recipe perfect for when you’re in the mood to bake, but you don’t want to go to the store with a huge shopping list of ingredients to pick up!

With the holidays coming up, I love the idea of making this Cinnamon Swirl Bread as part of a Christmas breakfast or brunch or even to give as a small gift for neighbors instead of the traditional cookie tray. And if you make this loaf for yourself, I definitely recommend sitting down to enjoy it with a mug of hot tea or coffee!

How to Make Cinnamon Swirl Bread

Combine the flour, a cup of sugar, baking soda, and salt in a large bowl. In a separate bowl, stir together the buttermilk, egg, and oil. Pour the wet ingredients into the dry ingredients and stir until just combined.

Whisk together the cinnamon and sugar in a small bowl.

Bake the bread for 45-50 minutes, or until a toothpick inserted in the center comes out clean.

Cool the bread in the pan for 10 minutes, then remove it and let it finish cooling on a wire rack. Combine the confectioners’ sugar and milk in a small bowl and drizzle it over the loaf.

Hint: Sift the confectioners’ sugar before making the glaze. This ensures that the glaze is completely smooth, with no lumps.

Is cinnamon bread good for you?

Not exactly! This is definitely a dessert recipe or a special occasion breakfast.

Can you freeze cinnamon bread?

Yes, this recipe is great for freezing! Wrap it well in at least two layers of plastic wrap and freeze it for up to 2 months. Let it thaw in the refrigerator before serving.

Don’t overmix when you’re using a knife to make the swirl. Too much swirling will incorporate the cinnamon sugar into the batter and you won’t get the pretty effect!

If you’re looking for more…try these recipes next! 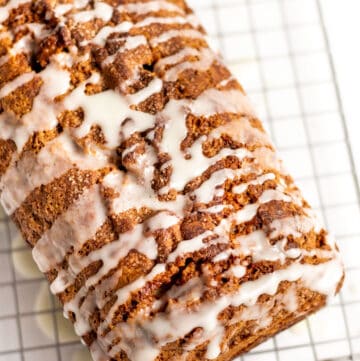 This Cinnamon Swirl Bread recipe has a ribbon of cinnamon sugar baked into the middle! It's as beautiful as it is delicious.
No ratings yet
Pin Recipe Save RecipeSaved Recipe! Rate Recipe Print Recipe
Course: Breakfast, Dessert
Cuisine: American
Author: Kasey Schwartz
Prevent your screen from going dark