Pulled Pork Tacos is a simple recipe to toss in your slow cooker and cook. And once you taste the flavor of these slow cooker pulled pork tacos, you just might not want your tacos any other way, ever again. There’s just something so comforting about this simple sweet and spicy recipe.

With this simple pork recipe making up to 15 tacos, this is an easy meal that will feed your whole family will ease.

The added shredded orange peel is such a fun flavor twist to this simple taco recipe. It adds a citrus flavor that really packs a punch!

If you’re craving a delicious slow cooker recipe, this is a great choice to make!

You can easily use this simple pulled pork recipe to meal prep ahead of time and have dinner waiting for everyone after a long day of school or work.

Trim off any excess fat before adding to the slow cooker. Pork shoulder is the best cut of meat to use for this recipe because it’s easy to shred once cooked.

Every one of the spices in this recipe adds so much fun flavor!

Don’t forget to add in the juice to help with that citrus taste!

Like spice? Check out The Pioneer Woman’s Spicy Pulled Pork recipe as well! It’s that same pulled pork flavor, but with a kick!

How to make pulled pork tacos

In a small bowl, whisk together the dried oregano, cumin, salt, and pepper

Rub seasoning mixture onto pork shoulder on all sides

Remove pork from slow cooker onto a cutting board, let cool slightly

Heat oil in large skillet on the stove

Add pork and some of the juice from the slow cooker

Turn often to brown the pork until juices have evaporated

Serve immediately with tortillas and toppings

Store leftovers in the refrigerator

How to heat and store Simple Pulled Pork Tacos

To store and reheat pork tacos, just store the meat in an airtight container and keep it nice and cool in the fridge. Make sure to keep all the toppings stored separately in the fridge as well.

When you’re ready to reheat, just add the meat to a skillet and warm it back up or heat it up in the microwave as well.

Is carnitas the same as pulled pork?

It’s similar in texture but carnitas is typically only made with pork shoulder because the meat is so tender and juicy, which is a key element for carnitas.

What do you call pork tacos?

These tacos are also referred to as tacos al pastor.

Where did al pastor tacos originate? 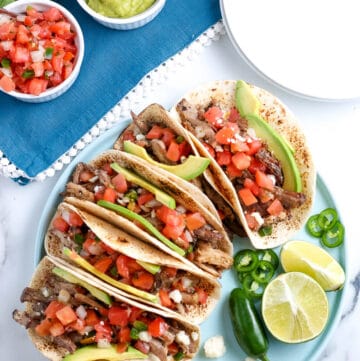 Don't miss out on these pulled pork tacos!
No ratings yet
Pin Recipe Save RecipeSaved Recipe! Rate Recipe Print Recipe
Prevent your screen from going dark