This layered banana pudding recipe is a classic Southern dessert that’s always a crowd-pleaser! It’s creamy, full of banana flavor, and it takes minutes to make!

There’s something undeniably delicious about layered banana pudding. Maybe it’s the cloud-like whipped topping, or the velvety smooth, creamy pudding layer; maybe it’s the Nilla wafers, which get melt-in-your-mouth soft after being layered with the pudding.

Whatever it is, this classic dessert is a favorite for good reason!

Whether you’re looking to impress guests with a show-stopping dessert or just want a dessert recipe easy enough to throw together for a weeknight dinner with your family, layered banana pudding is perfect!

Banana pudding is a delicious, creamy dessert that will satisfy anyone with a sweet tooth—especially if they love bananas!  While making layered banana pudding might seem like it involves a lot of steps, it’s actually easier than you might expect. In fact, this is a great recipe to have your kids help with!

With just a few simple ingredients and some patience (seriously, the waiting is the hardest part), you’ll be able to whip up a delicious homemade banana pudding that your family will love.

How to Make Layered Banana Pudding

In a large bowl, use an electric mixer to beat the cream cheese until it is smooth and fluffy. Add the sweetened condensed milk, pudding mix, milk, and vanilla extract. Beat until the ingredients are combined, then stir in half of the whipped topping.

Cover the dish and refrigerate for at least 4 hours or overnight.

Remove the layered banana pudding from the refrigerator and garnish with Nilla Wafers and banana slices before serving.

Store layered banana pudding in the refrigerator for a day or two; the longer it’s refrigerated, the more likely it is that the bananas will darken, but they can still be eaten.

Do you put eggs in banana pudding?

This banana pudding recipe is made with pudding mix, which means you don’t need to add eggs!

What can I use instead of vanilla wafers in banana pudding?

Will banana pudding thicken in the fridge?

Yes, when you put the banana pudding in the refrigerator, it will get thicker! That’s why it needs to set for at least 4 hours before serving. 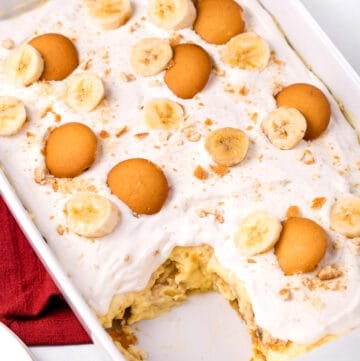