It doesn’t get much better than a French dip sandwich. The classic sandwich is messy in the best way possible. The tender meat, combined with juice dripping down in the crusty bread, makes one of the best bites possible.

You can’t go wrong when it comes to a French dip sandwich. The sandwich is one of those meals that looks complicated to make, but it is actually pretty simple. It takes a bit more time than your average sandwich to make, but it will well be worth the effort.

The sandwich was actually made by accident when Mathieu dropped a French roll into a pot full of drippings in a roasting pan. Instead of swapping out the bread, he served it with the meat and created a whole new genre of sandwiches.

When it comes to a French dip sandwich, you may think the star of the show would be the meat, but it’s actually the jus dipping sauce. The sauce is what makes the sandwich a hit. It adds a juicy flavor and brings all the extra drippings from the meat to the sandwich, creating a flavor bomb in the process.

The jus, however, can’t be the star of the French dip sandwich without a good piece of crusty bread. The bread absorbs all the juices, so it is important to use thick bread that can live up to the challenge. Trust me, and don’t use a thin piece of bread for this sandwich. You’ll have a mess on your hands and won’t enjoy the sandwich like it is meant to be made.

INGREDIENTS FOR A FRENCH DIP SANDWICH

HOW TO MAKE FRENCH DIP SANDWICHES FOR ALL OCCASIONS

Preheat the oven to 450 degrees and prepare a roasting pan for the steak.

Rub the steak with olive oil. In a small bowl, combine the spices and mix them together. Coat the steak with the spice rub and place the steak in the roasting pan. Cook the steak for 20 minutes or until it reaches an internal temperature of 125 degrees. Let it rest on a cutting board and adjust the oven temperature to 325.

Take the roasting pan with all the drippings and place it on top of a stove burner. Add in the onions and cook until they are soft for about 3 minutes. Add in the garlic and thyme and continue to cook. Mix in the beef broth and Worcestershire sauce and bring the mixture to a simmer. Cook for 8-10 minutes or until the sauce has thickened.

Thinly slice the beef once it is done resting. Slice and toast the bread in the oven with a slice of cheese on top. Take the roll out of the oven when the cheese starts to melt. Add on the beef and serve alongside the jus.

WHAT GOES WITH A FRENCH DIP SANDWICH?

WHAT CUT OF MEAT DO I USE FOR A FRENCH DIP SANDWICH?

A French dip is made using beef. Most French dip sandwiches use chunk or rump roast. This recipe uses ribeye steak.

WHAT IS THE DIFFERENCE BETWEEN AN ITALIAN BEEF AND A FRENCH DIP SANDWICH?

While the sandwiches are very similar, they have big differences that make them stand out from one another. Italian beef sandwiches are slow-cooked with a dry mix of Italian spices. The sandwich is then topped with a piece of provolone cheese like a French dip and finished off with pepperoncini, giving the sandwich a much different flavor than the French dip. 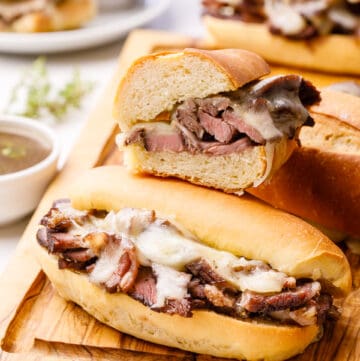