Whether you call it cornbread dressing or cornbread stuffing, this recipe is the perfect accompaniment to your Thanksgiving turkey! Cornbread brings just a touch of sweetness, while the cream of chicken soup gives the recipe a unique, creamy texture.

There’s a lot to get excited about on Thanksgiving Day. Turkey! Green bean casserole! Mashed potatoes! Pumpkin pie, apple pie, ALL THE PIE! One dish that tends to be more of an afterthought is the dressing. People like it, but is it really anyone’s favorite? Probably not… well, until this cornbread dressing recipe, at least!

So what makes this cornbread stuffing different? I’m glad you asked! First, there’s the cornbread. If you’ve only had stuffing made with stale white bread in the past, making it with cornbread is a whole new ballgame—it’s tender, just a touch sweet, and it completely transforms your dressing into something special. The recipe has all the savory flavors you expect—broth, onion, celery, garlic—but it also has cream of chicken soup.

I know, right?! It’s a bit unexpected, but the result is something a little more like a cornbread dressing casserole rather than just your standard dressing. This is my family’s favorite Thanksgiving stuffing recipe and I’m excited to share it with you!

How to Make Cornbread Dressing

1. Prepare: Preheat your oven to 350ºF and coat a 3.5-quart baking dish with cooking spray.

2. Cook the Veggies: Melt the butter in a large skillet over medium heat, then add the onion, celery, and garlic. Cook for 8 to 10 minutes, stirring occasionally, until tender.

3. Combine the Stuffing Ingredients: Stir together the broth, the next 5 ingredients, and cooked vegetables in a large bowl. Crumble in the cornbread and stir to combine. Pour into the baking dish.

Hint: You can get a head start on this recipe by making the cornbread a day or two in advance.

What is the difference between cornbread stuffing and cornbread dressing?

Why do you put eggs in the dressing?

The eggs help bind the dressing together to keep it from falling apart. It also keeps the dressing from drying out!

How long can you keep cornbread dressing in the refrigerator?

If you want to make cornbread dressing in advance, you can bake it and then refrigerate it for up to 2 days. (It will actually last 3 to 4 days in the fridge, but if you’re making it ahead to serve at Thanksgiving, I don’t think you want to chance it and make it 4 days in advance!)

Your dressing is done when the edges are nicely browned and the liquid is absorbed. 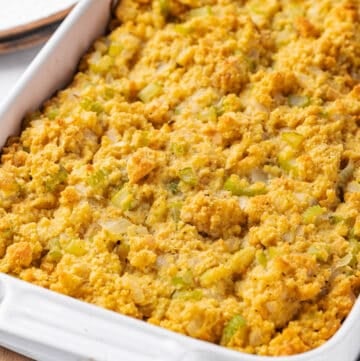 Whether you call it cornbread dressing or cornbread stuffing, this recipe is the perfect accompaniment to your Thanksgiving turkey!
4.05 from 45 votes
Pin Recipe Save RecipeSaved Recipe! Rate Recipe Print Recipe
Course: Side Dish
Cuisine: American
Author: Kasey Schwartz
Prevent your screen from going dark