This Baked Apple Cider Donut recipe couldn’t be easier to make! There’s no frying needed and boxed spice cake mix means you don’t even have to measure out flour and sugar. Dip the donuts in cinnamon sugar and enjoy them warm out of the oven for the perfect fall breakfast.

Deep-frying isn’t exactly hard, but it is a hassle. You have to keep an eye on the oil temperature because if it’s too hot, your donuts will be raw in the middle, but if it’s too cool, your donuts will be a greasy mess. You have to drain the donuts on layers of paper towels, then when you’re done with it all, you have a pot full of oil to discard, which kind of feels like a waste. This is why I love making baked apple cider donuts instead. No muss, no fuss!

Thanks to the baking and my secret of using spice cake mix as a base, this apple cider donut recipe is so stinkin’ easy. You’ll get the same apple cider flavor you expect from an apple cider donut, but you’ll also get the bonus of being able to eat them fresh out of the oven, when they taste the best! Pair them with pumpkin spice cold brew and get ready for cozy season!

If you haven’t tried making your own donuts before, this is a great recipe to start with. You don’t even need a donut pan! You can pipe donut shapes onto a baking sheet instead.

I think you’ll find that baked donuts really aren’t lacking anything that fried donuts have, except some extra calories. They’re softer on the outside when you bake them, but I like them better that way!

For the entire recipe and ingredient amounts – see the recipe card below.

For the apple cider donuts:

Preheat your oven to 325ºF and grease a donut pan or baking sheet.

Use an electric hand mixer or whisk to combine the cake mix, butter, milk, eggs, and apple cider, beating for about 2 minutes, or until the batter is light and all the ingredients are well-combined.

Transfer the batter to a large piping bag or place it in a zip-top bag and snip off one corner. Pipe the batter into the prepared donut pan or pipe circles onto the baking sheet.

Bake the apple cider donuts for 10 to 12 minutes, or until the donuts spring back when you gently poke them.

Cool the donuts on a wire rack for 5 minutes, then dip them into melted butter and cinnamon sugar. Tap off the excess and let the donuts finish cooling on the wire rack.

Hint: Place a baking sheet under your wire rack to catch any excess cinnamon sugar.

If you don’t have a donut pan and you’re piping the donuts onto a baking sheet, you can create different shapes for fun. Make donut holes or hearts instead of circles!

You’ll taste the apple cider, but you also taste the spices from the cake mix and cinnamon sugar. Basically, this baked apple cider donut recipe tastes like apples and warming fall spices.

Can you use apple juice instead of apple cider for donuts?

No, don’t use apple juice instead of apple cider. It doesn’t have the same intense apple flavor as cider, so it will be overpowered by the spices in the cake mix.

Do you need to refrigerate apple cider donuts?

No, you can keep apple cider donuts on the countertop in an airtight container for up to 2 days. They can also be frozen and thawed in the fridge overnight or microwaved until warm.

Use fresh apple cider from your favorite orchard or the kind that’s sold in the refrigerated section of the grocery store. Shelf-stable apple ciders, which are sold next to apple juice, don’t have the same flavor as fresh.

If you’re looking for more easy Apple + Fall Recipes….try these recipes next! 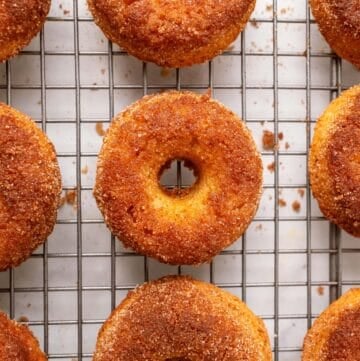