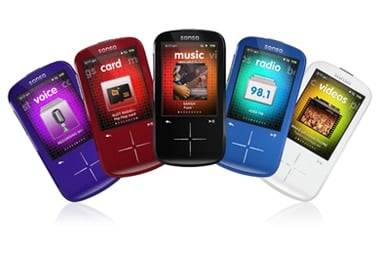 As my 4 1/2 year old gets older, the Christmas presents actually get easier.  This year, she seems to be into anything a 13 year old would be into.  Clothes, music, video games and of course toys.  But, the one thing she is into that I am also into, is our new SanDisk Sansa Fuse+ MP3 Player.

The Sansa® Fuze™+ MP3 player gives you more player for less money. From its sleek and thin styling to its invisible touch control, the Sansa Fuze+ MP3 player delivers a great user experience and lets you do more than just play music files. Add a blank microSD™ card to expand your own music library or an optional slotRadio™ card for an instant library of songs – even listen to FM radio with the ability to record stations or record your voice with the built-in mic. Sansa Fuze+ MP3 player is the newest in a long line of award-winning players from the inventor of flash memory cards.

The SanDisk Sansa Fuse+ MP3 Player has a sleek, sturdy modern design with bright hip colors & is an affordable option for us budget friendly moms.  No paying for download after download, this MP3 Player uses memory cards – just like the one in your camera – to deliver hit after hit with organized playlists.  It even has the option of an FM radio.  Now, that’s an awesome function for your budget!

Each SanDisk® slotRadio™ card includes 1,000 songs featuring artists from the Billboard® charts. Songs are preloaded onto a tiny card with handcrafted playlists that include hundreds of artists. Like a FM radio experience, you can lean back and let slotRadio do the heavy-lifting so you don’t have to download music song-by-song. Songs are played in sequence and are locked to the card. You can skip individual songs as many times as you like, or switch between playlists with a touch of a button. Simply insert a slotRadio™ card into the slotRadio player and enjoy music in an instant. It’s great music made effortless.

Now, we can both share something that I’m not afraid will get broken or cost hundreds of dollars to replace if it gets lost!  The SanDisk Sansa Fuze+ MP3 player is affordable and family friendly.  I have a feeling it will be totally replacing our “other” MP3 player that we have to invest tons of money into to download only a few songs! 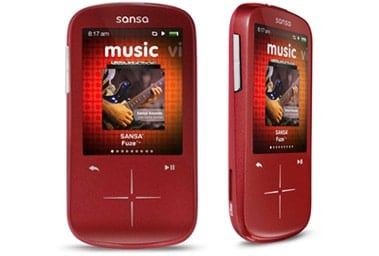 *DISCLAIMER* I wrote this review while participating in a blog tour campaign by Mom Central Consulting on behalf of SanDisk and received the SanDisk Sansa Fuze+ and VH1 slotRadio Card to facilitate my review.